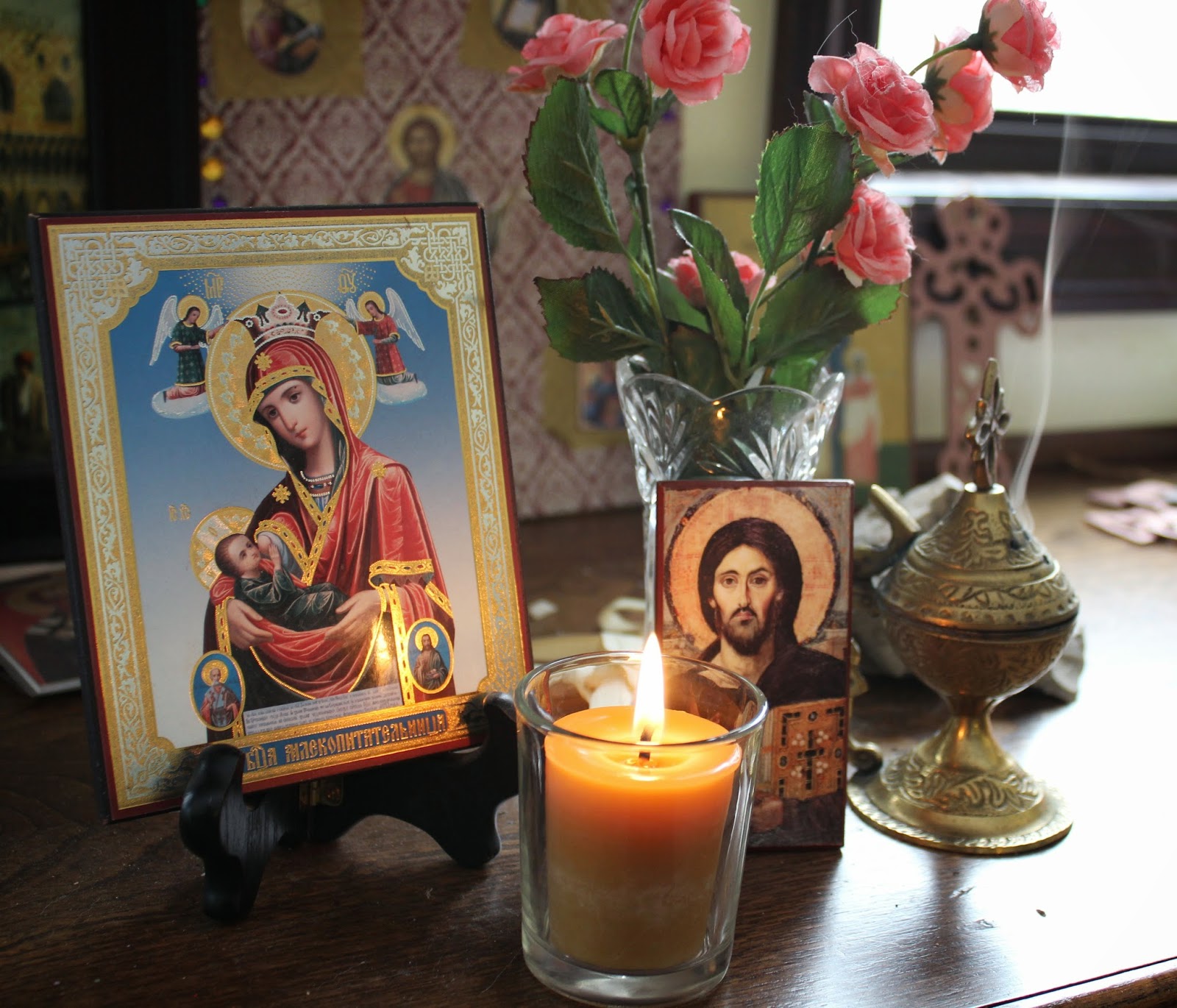 Mounting an icon print on wood

In preparation for the Sunday of Orthodoxy this weekend (http://antiochian.org/sundayoforthodoxy) I decided a good project for the kids and I would be to mount some icon prints on wood.  I had been wanting to try this project for awhile so this seemed like the perfect week for it.  This is not an easy project for children so I had them participate as best they could.

The materials we used were:
unfinished wood plaques from a craft store
printed icons (one from a magazine, one from a calendar and one print from the Convent of St. Elizabeth)
fine sandpaper
craft paint
mod podge
paintbrush 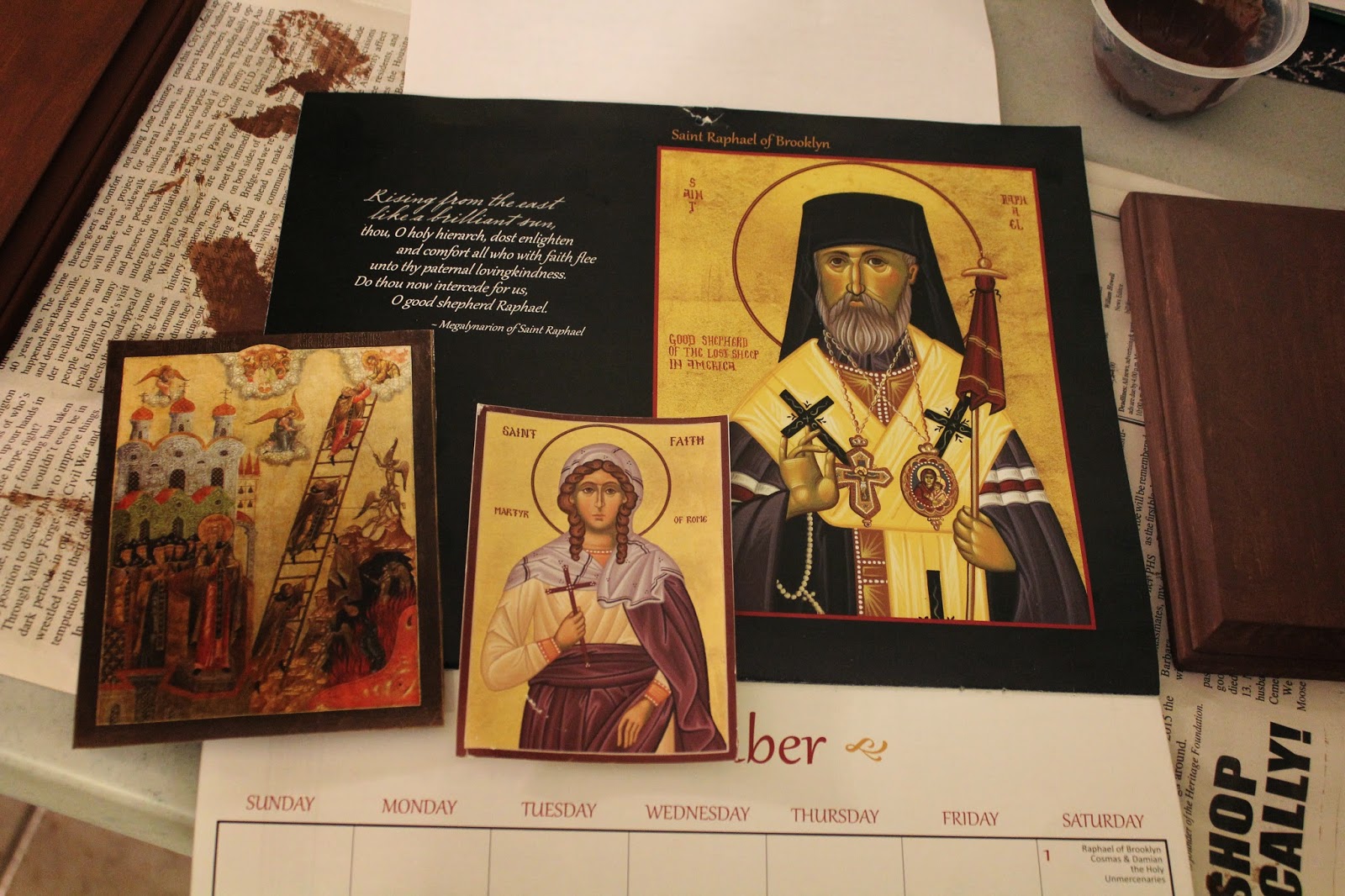 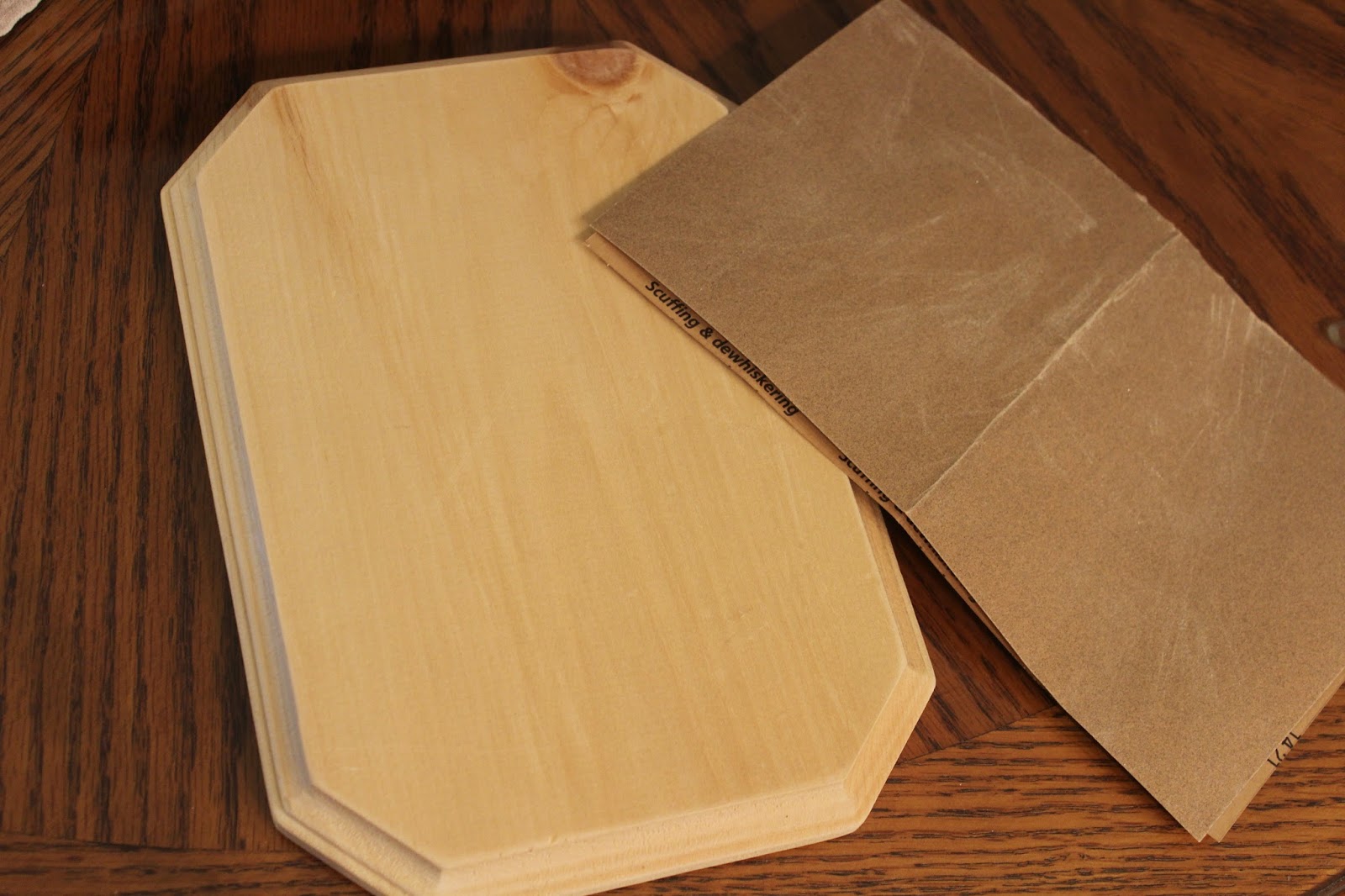 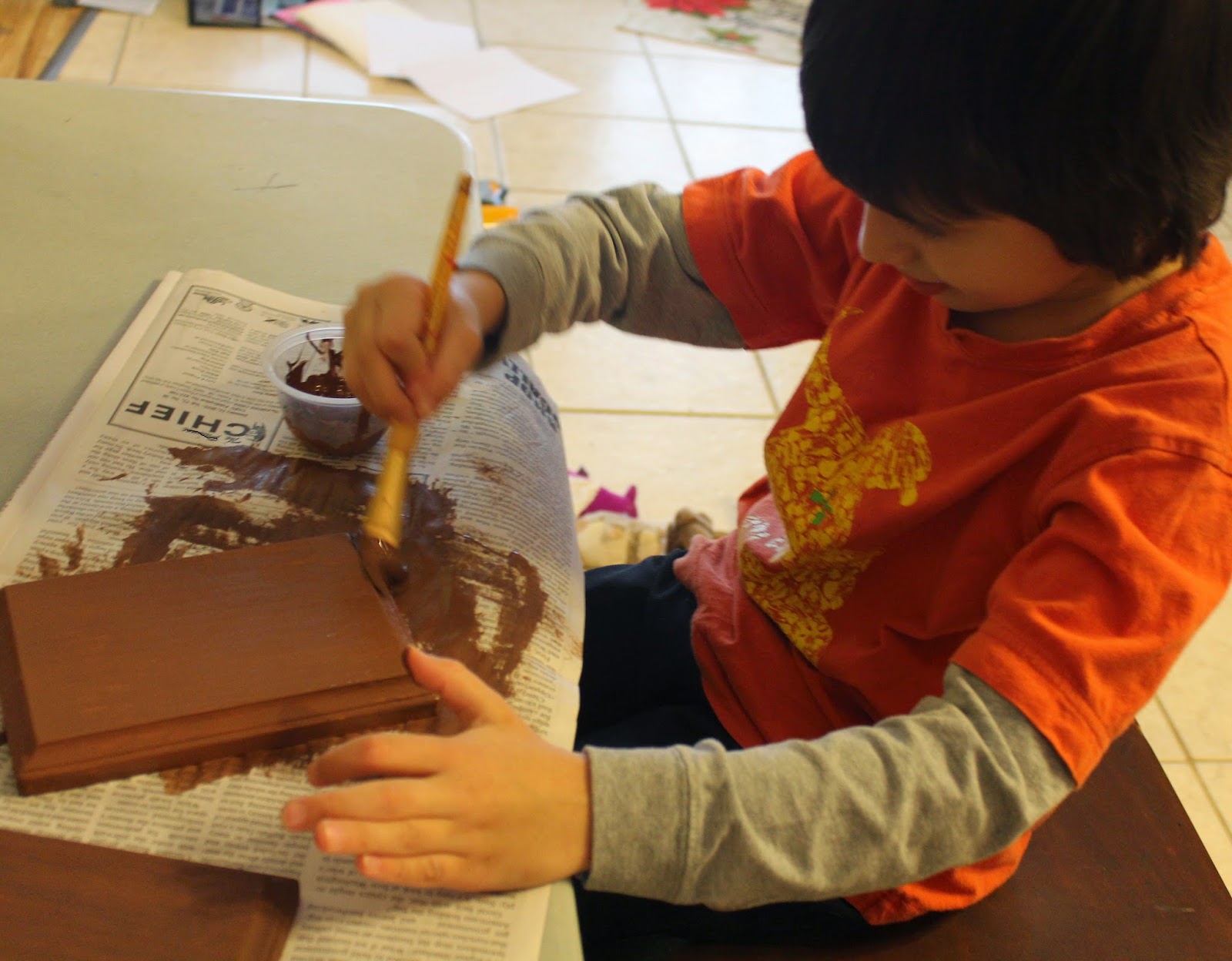 I had not tried this before so it was a bit of an experiment.  I have read about mounting icon prints on wood using varnish, but I decided to try the mod podge method instead.  I watched a short tutorial on mounting a photo onto wood with mod podge so I used a similar method for the icons.  I learned that the thinner papers wrinkled some with the mod podge.  The thicker icon print from St. Elizabeth's did not wrinkle, but I had to be careful when applying the mod podge because if I wiped the mod podge off of the print it smudged off the ink.  So I carefully applied a layer of the mod podge to that print taking care not to wipe or smudge it.  Since the thinner paper of the magazine and calendar wrinkled some I had to use my fingers to smooth out wrinkles after applying the mod podge.  Thankfully the ink did not smudge on these.  Overall the project came out decent, but not perfect. 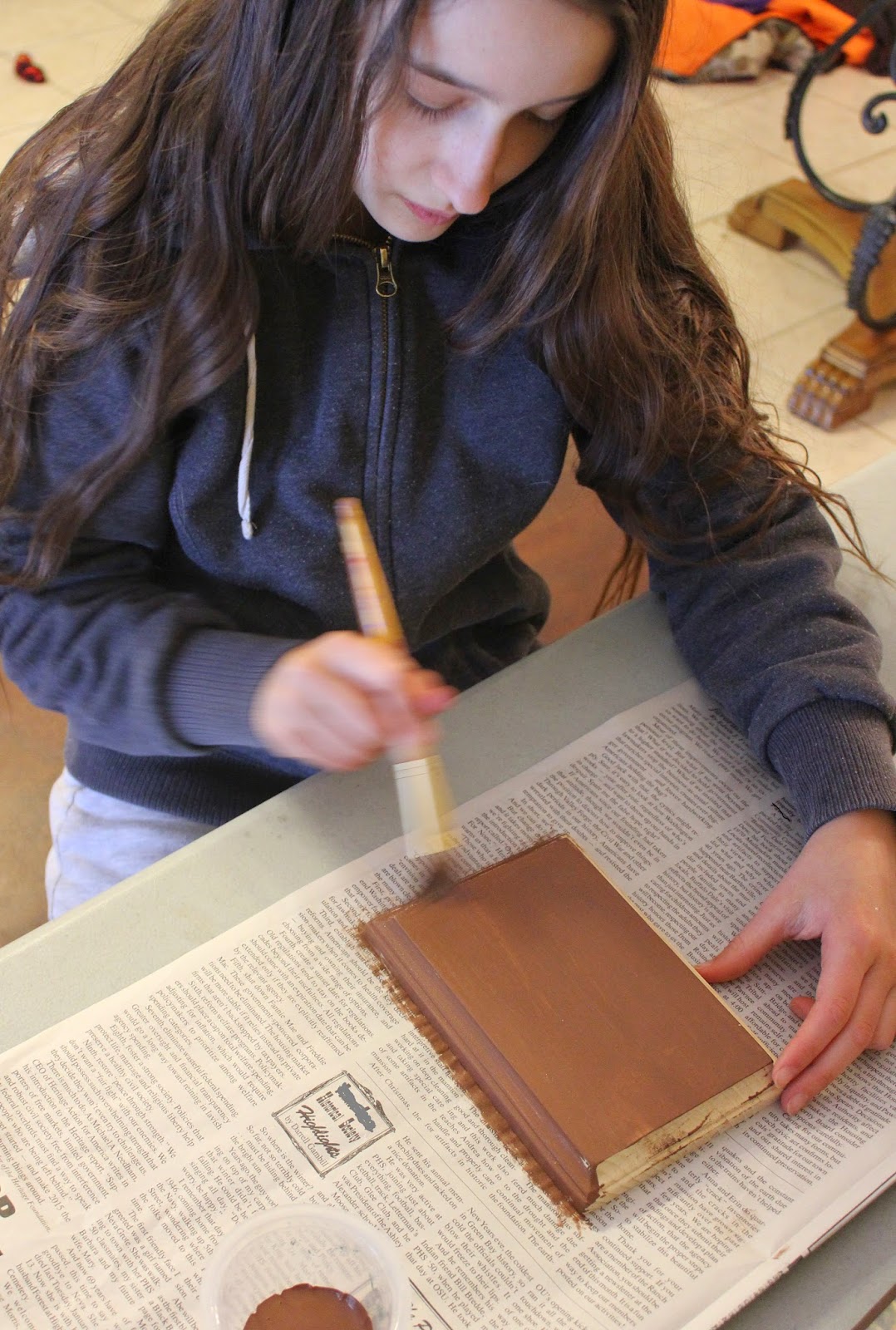 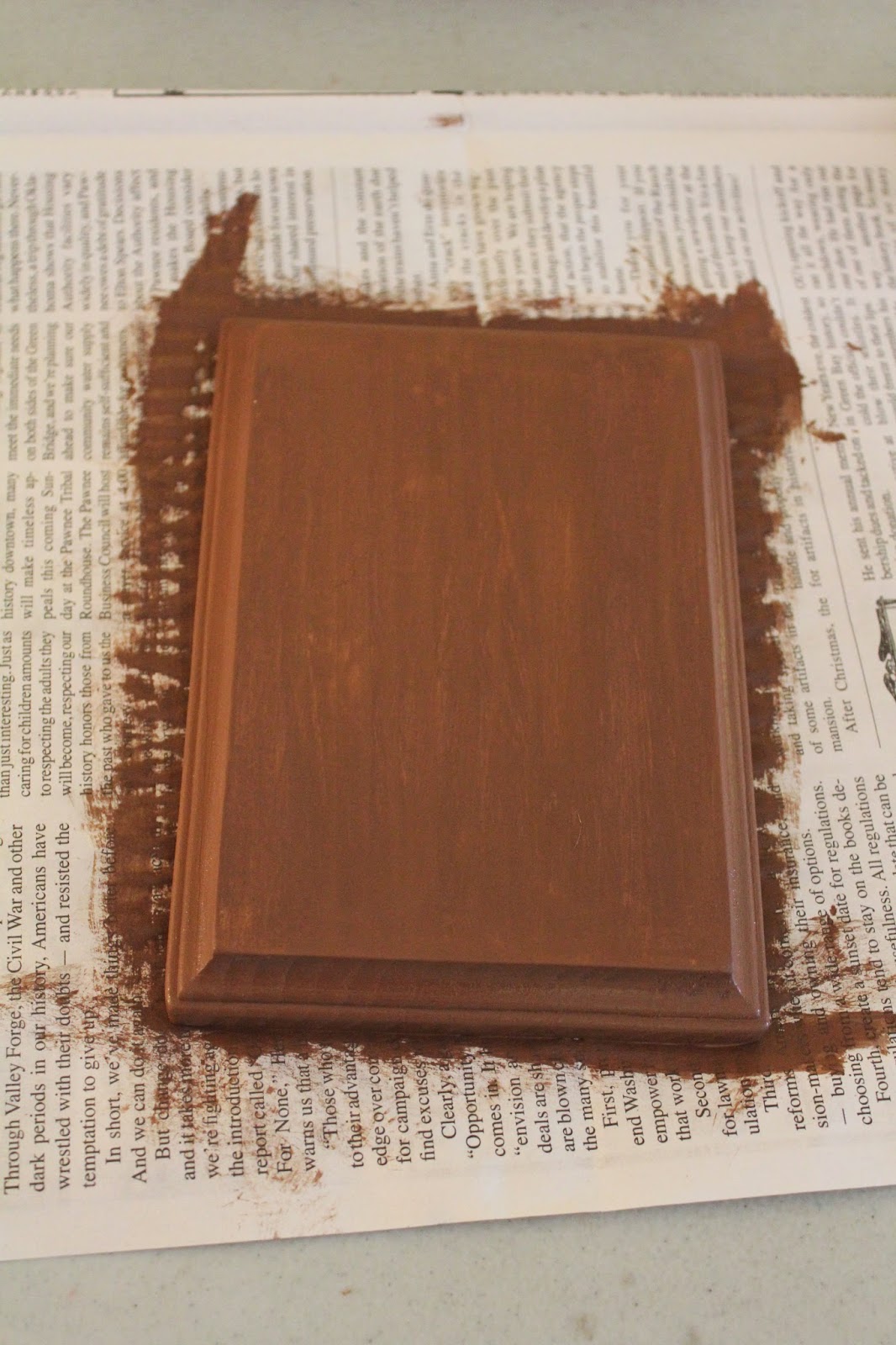 Method:
First I lightly sanded the wood plaques with fine grain sandpaper (220).  Then I had my kids each paint the front of a plaque for their chosen icon print.  The store was out of the size of plaque I needed for my daughter's print so we had to use a plaque that was too large.  None of the icons fit perfectly onto the wood, but I found wood fairly close in size for the other two. 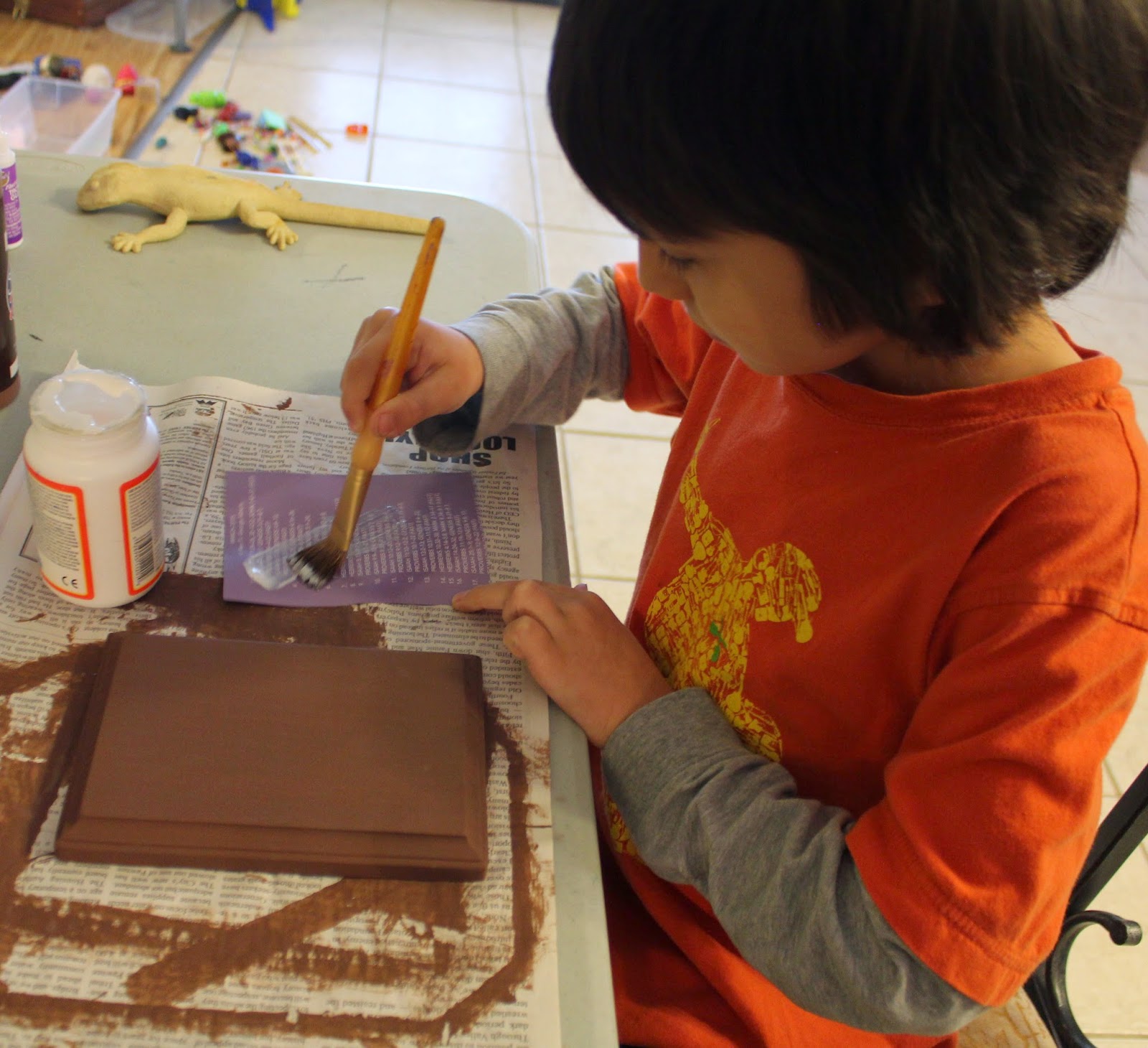 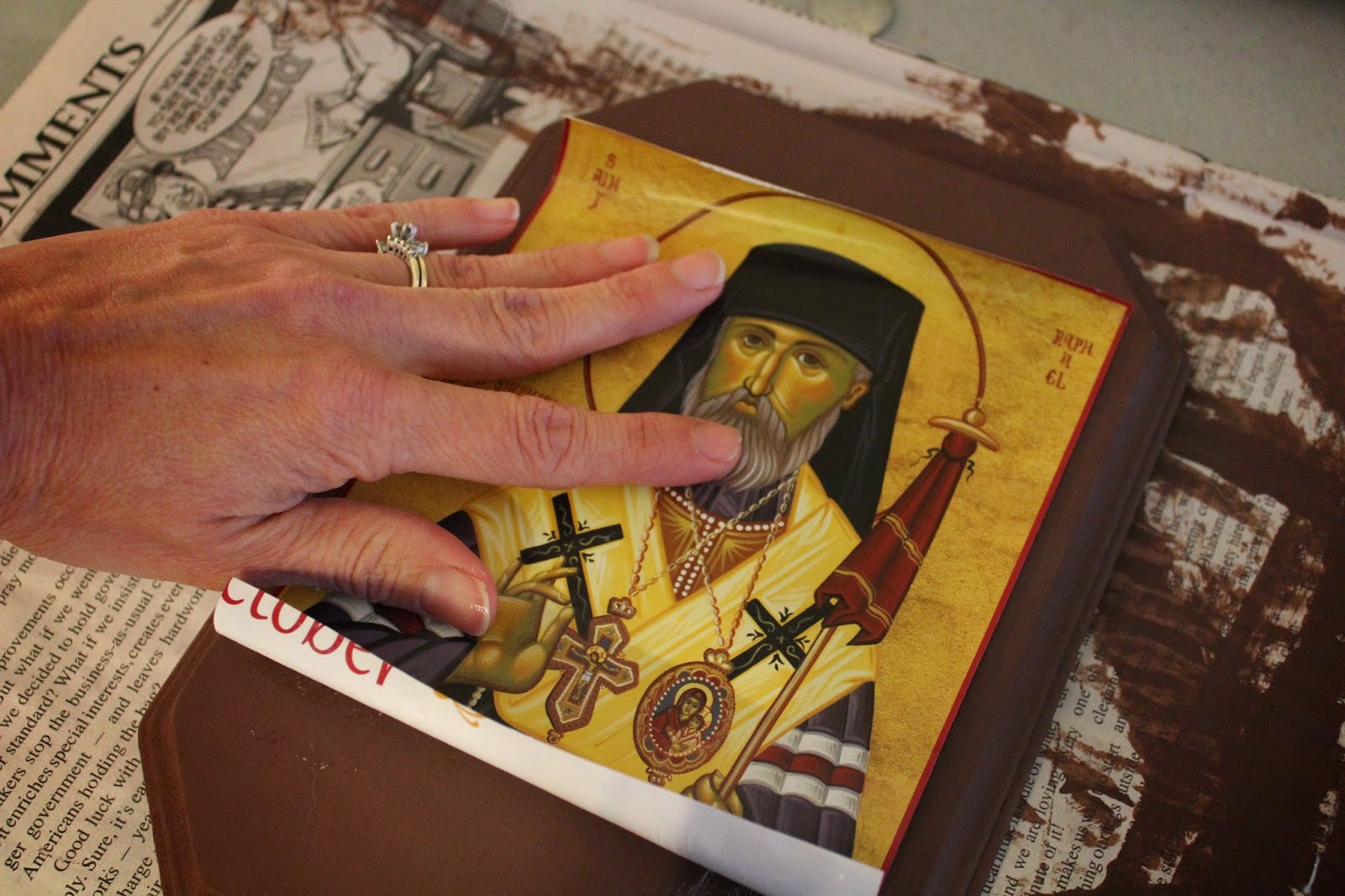 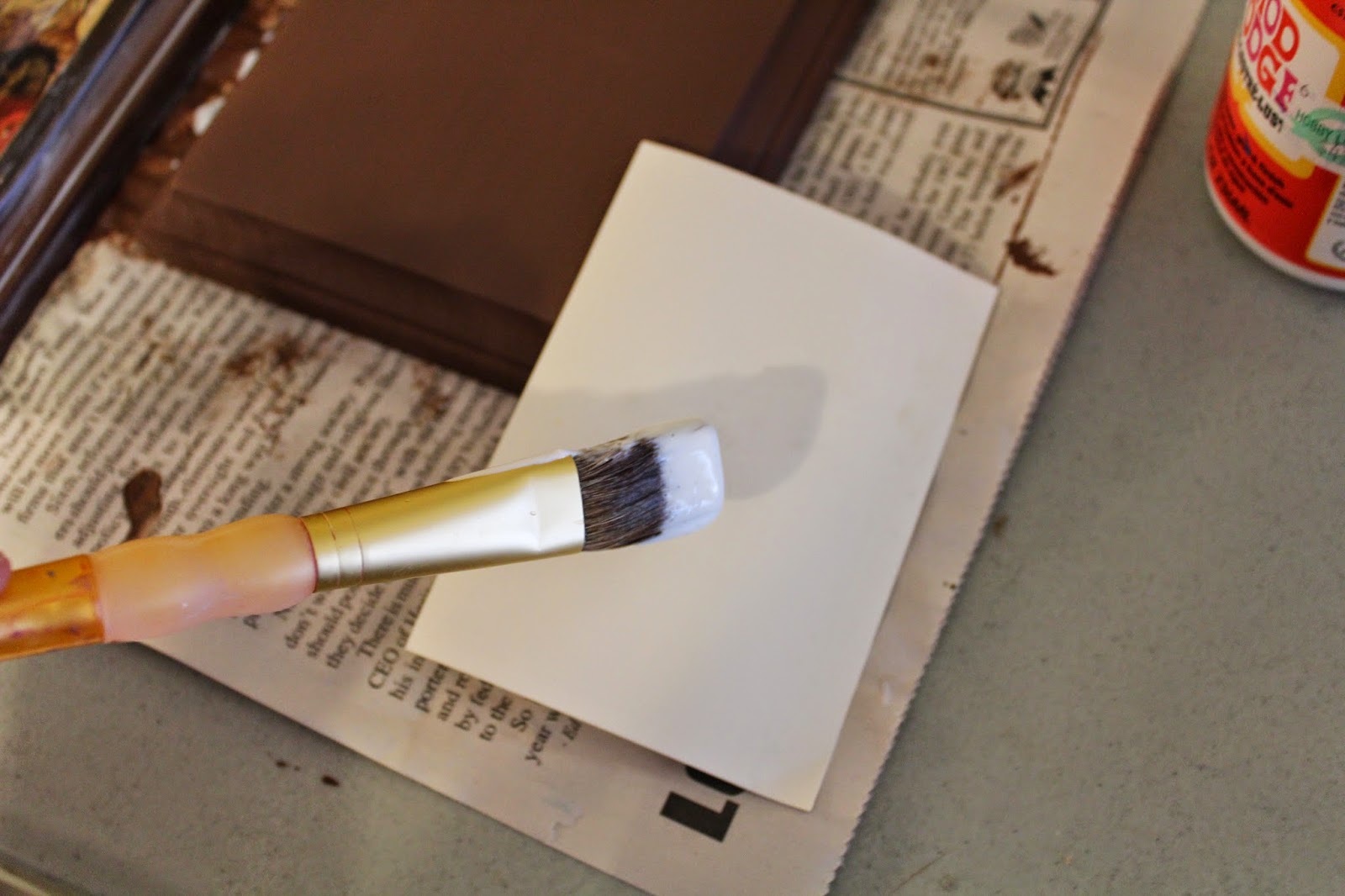 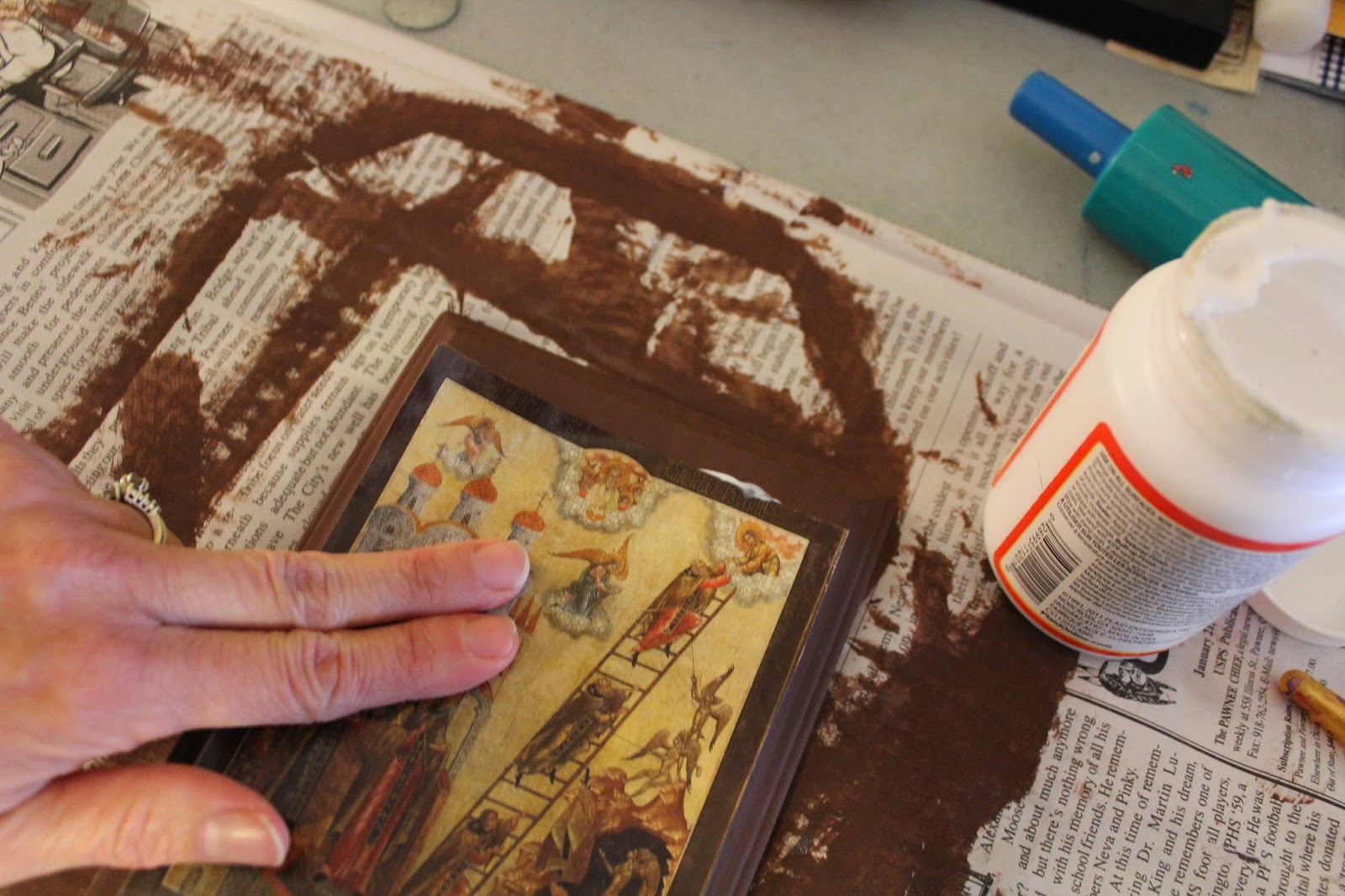 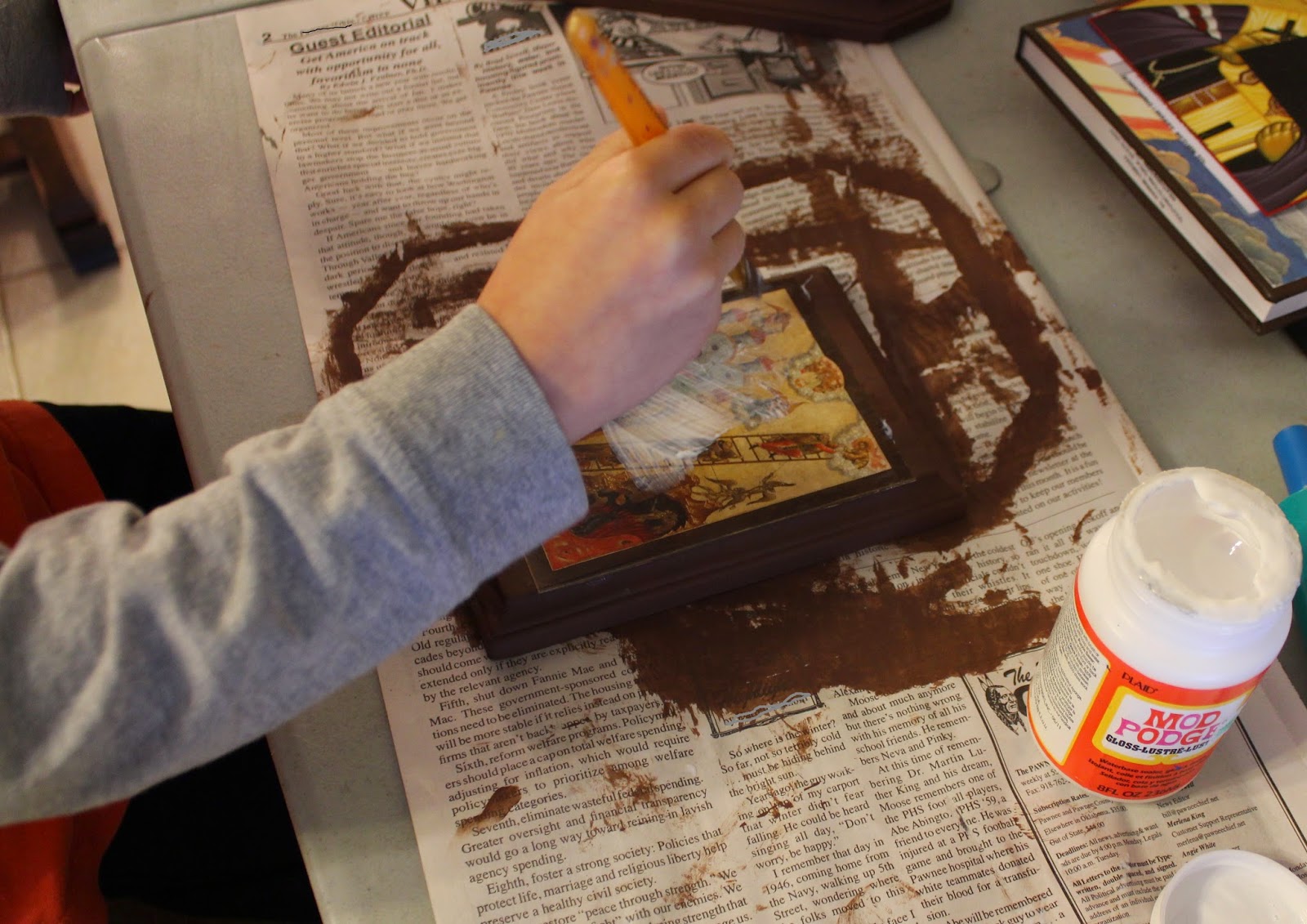 Then I had the kids help apply a thin layer of mod podge over the top of the print and wood.  (its best to lay the wood on plastic while you do this step instead of newspaper so the wood does not stick to the paper).  I ended up doing most of this step myself when I saw that the thinner paper icons were going to wrinkle.  I tried to apply the thinnest coat possible to the thinner papers.  Then I smoothed the print out as best as I could with my fingers (I did not do this with the print from St. Elizabeth's which was thicker).  Be sure to check a corner of your print to see if the ink is going to rub off before trying to smooth out after applying a layer of mod podge.  We only applied one coat of the mod podge and only to the fronts.  You can apply to the back also after the front has dried thoroughly, but we skipped that step.

After they had dried, the wrinkles were not too apparent.  For a first attempt with simple supplies the results were not too bad.  Unfortunately we are snowed in so we weren't able to take our icons to church today for the procession.  So we had our own procession at home. 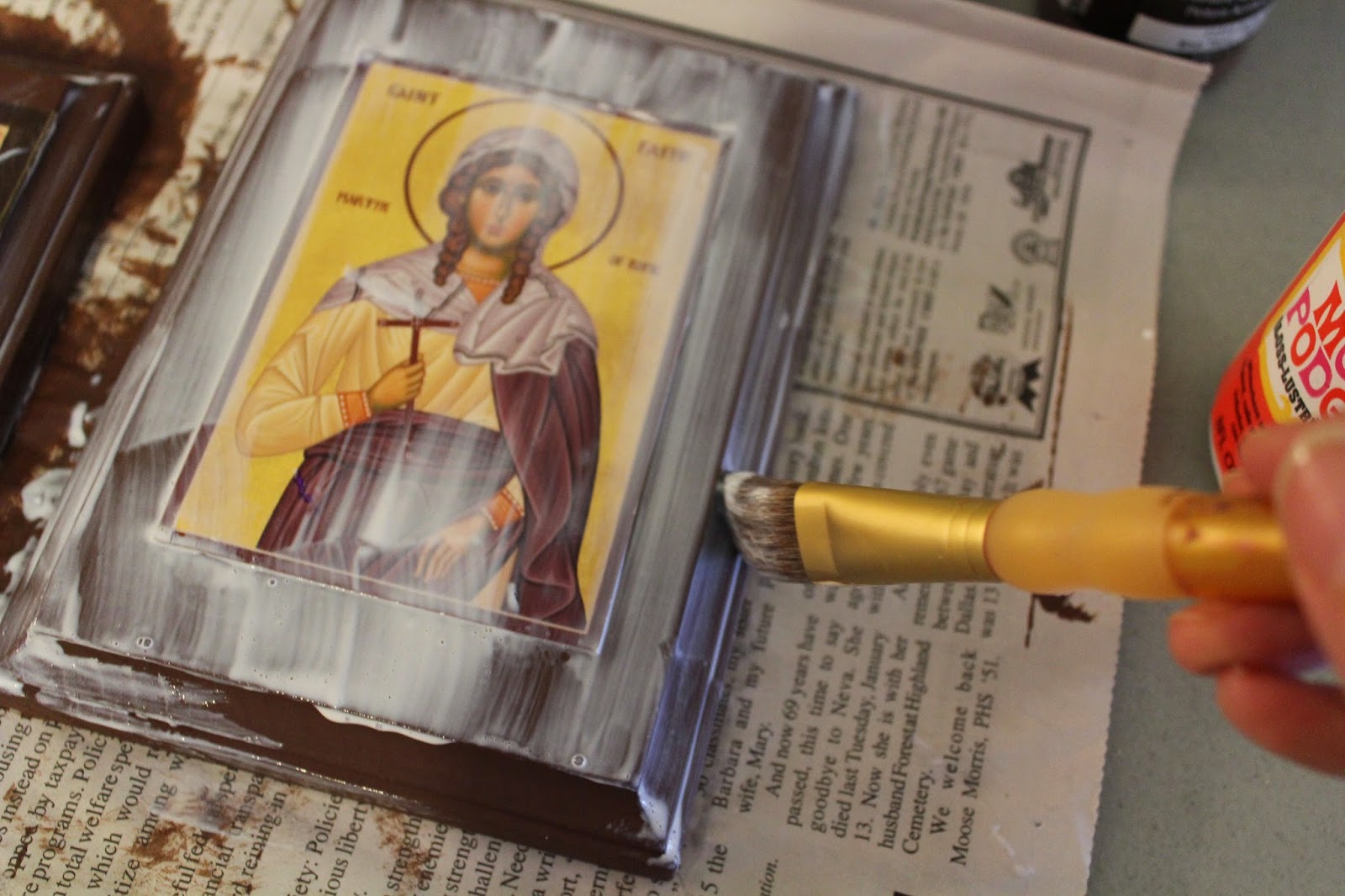 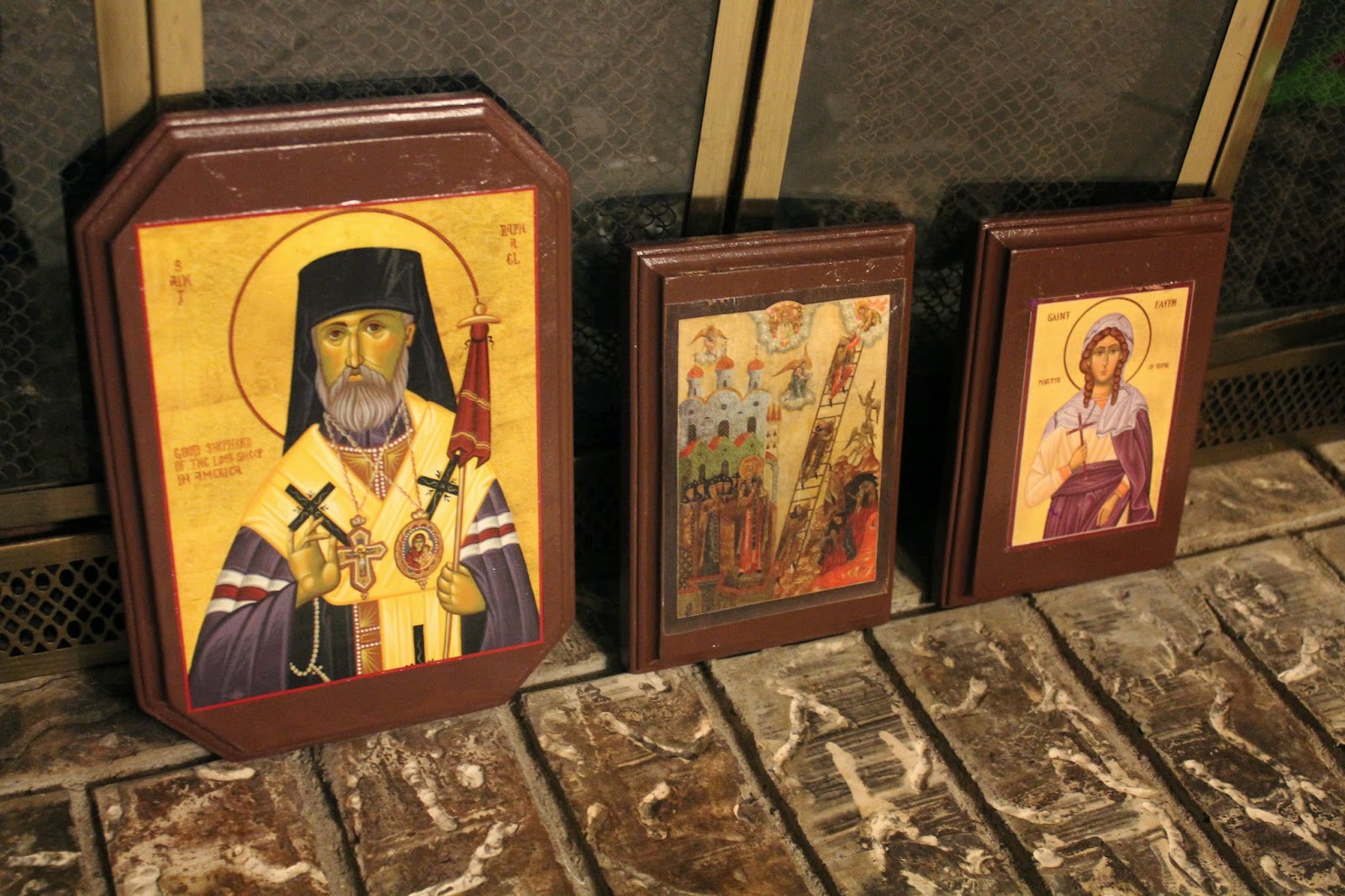 From the Antiochian Orthodox Christian Archdiocese website:  On the first Sunday in Lent, we commemorate the decision of the Seventh Ecumenical Council in 787 A.D. upholding the use of holy icons in Orthodox worship. We also commemorate today the unity of Orthodox belief and the oneness of our Faith throughout our various jurisdictions, nations and languages and across the continents and the centuries.
Posted by jeanniesophia at 12:01 PM