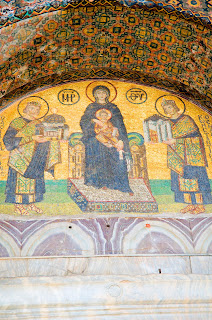 This was a lesson on Byzantine Art that I presented to my class.

During this lesson I focused on icons and mosaics of the Byzantine era.  I presented this lesson two different times with a different story and slightly different project each time.  I will explain both.
Here is a brief explanation of Byzantine Art and a timeline to give you some background info.


STORY:
For the story portion I read a children's version of the story of St. Catherine of Alexandria from the book Christina's Favorite Saints by Maria Khoury.  You could read any children's version of the life of St. Catherine or read a little about her yourself and retell the story in terms a child can understand.  I showed the children an icon of St. Catherine from the book.  You could show an icon from the internet if you do not have one on hand.  I chose St. Catherine for this lesson because I wanted to focus on mosaics and show children many of the beautiful Byzantine era mosaics from the Monastery of St. Catherine on Mt. Sinai.  St. Catherine was martyred in the early 4th century under the Emperor Maximinus who was carrying out a persecution of Christians.  According to tradition, St. Catherine's body was carried to Mount Sinai by angels where a monastery and church were later built by order of the Byzantine Emperor Justinian. The site where Catherine's body was found is also believed to be the site of the burning bush seen by Moses.  You can read more about St. Catherine here.  Explain to the children that Justinian was an Emperor of the Byzantine Empire.  He had many churches and monasteries built during his reign.  He also attempted to restore the Roman Empire to its ancient boundaries and was able to reconquer much of that land including Italy.


EXAMPLES OF ART:
I showed the children many photos of the Monastery of St. Catherine from the book The Monastery of Saint Catherine at Mount Sinai: The Church and Fortress of Justinian. I showed them a few photos of the monastery grounds themselves and of the precious art work that is preserved there. I focused mainly on the mosaics. You may be able to request this book on inter-library loan or simply show photos of the monastery and mosaics from sources online. I explained a bit about icons and that they are a sacred and spiritual form of art that include many symbols to convey a deeper spiritual meaning. They are paintings or mosaics of the Lord Jesus Christ, Mary the Mother of God, of Angels and Saints. Read here and here for a further explanation of icons. The book Pictures of God: A Child's Guide to Understanding Icons is also helpful in explaining icons to children.
(See bottom of this post for more info on Byzantine Icons)

I explained that a mosaic is a  picture or pattern made by arranging together small colored pieces of stone, tile, or glass.  Some of the tiles in the Basilica of San Vitale in Ravenna were set at a slight angle to reflect light and cause special color effects.  Mosaics were sometimes used in churches instead of fresco paintings because they were not as susceptible to humidity.

This website has some lovely photos of Byzantine Art including some mosaics from St. Catherine's monastery, Hagia Sophia and Ravenna.  You can also search for Byzantine art books at your local library for examples of icons and mosaics to show the children such as the Larousse Encyclopedia of Byzantine and Medieval Art.  I also used the book Art History, Vol. 1 by Marilyn Stokstad as a reference.  There is a chapter on Jewish, Early Christian and Byzantine Art.

You can show the children mosaics of Emperor Justinian and his wife the Empress Theodora from Ravenna, Italy.  Khan Academy has a helpful video with photos of the interior of the Basilica of San Vitale in Ravenna. 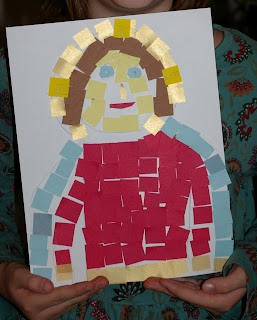 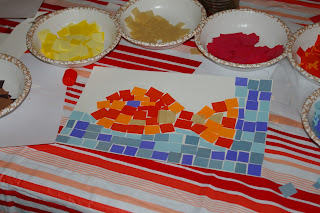 For the project I had the children create a mosaic picture with squares of colored paper.  I cut the paper out ahead of time and placed it by color in bowls.  I included some special shimmery gold colored paper since Byzantine mosaics and other types of Byzantine art often included gold tiles or gold leaf.  I purchased the special paper at Hobby Lobby where you can buy paper by the sheet.  I used construction paper and other colored paper that I had on hand for the other pieces.  I let the kids trim their pieces if they wanted to make their picture more precise.  They glued their paper pieces onto poster board with glue sticks.  I cut the poster board small enough that it would fit in their notebooks.  You can use any size, but I've found that most kids are intimidated by a larger piece of paper when trying to fill it with small mosaic pieces. 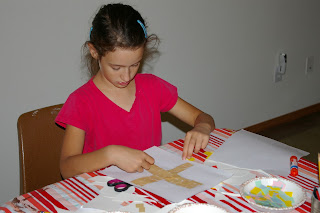 Alternative materials:  When doing this project previously I used dried beans for the mosaics instead of paper.  I used black beans, white beans, red beans, kidney beans and green split peas to give the kids a variety of colors.  We glued the beans onto a piece of poster board using tacky glue.  That was the lesson during which I read the story of Sts. Constantine and Helen.  We had focused quite a bit on the cross and I had showed them different forms of the cross used in art so many of the children included a cross in their mosaics. 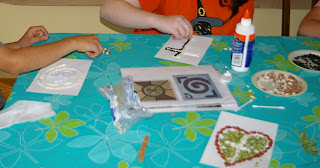 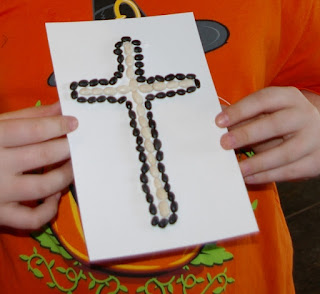 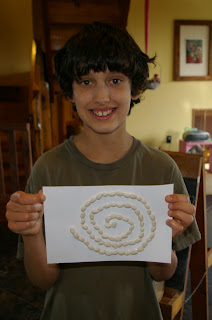 HANDOUTS:  I gave the children a list of terms related to Byzantine Art.  I used this handout for two lessons.  The second lesson focused on Byzantine Architecture.  I will post that lesson next.
I also gave the children a map of the Byzantine Empire around 565 AD at the death of Emperor Justinian.  I had them color in the area that was included in the Byzantine Empire at that time.  I used the map from this website.  I copied the image and pasted it into a blank document so I could enlarge it a bit.

Christina's Favorite Saints
A Child's Paradise of Saints
The Monastery of Saint Catherine at Mount Sinai: The Church and Fortress of Justinian
Pictures of God: A Child's Guide to Understanding Icons
Larousse Encyclopedia of Byzantine and Medieval Art
Art History, Vol. 1 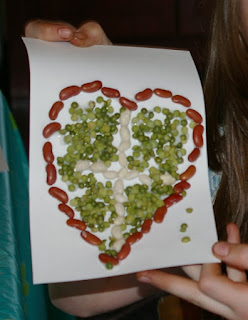 When teaching kids about icons I like to show them a few examples of icons (I have quite a few on hand, but you can print off copies from the internet) and I explain some of the symbolic details of these icons. Children really like looking for these details. Some examples are the color of clothing used. The Theotokos (Greek for God-Bearer) wears red outer garments and blue inner garments. The red is the color of humanity. Blue is the color of divinity so her inner garments are blue since she carried God (Jesus who was fully God) inside of her. Jesus appears inicons wearing blue outer garments and red inner garments - the opposite of Mary, the Theotokos. The divine person of Jesus put on or took on our humanity. Another symbol used is a cloth draped across the background objects. This signifies that the scene is taking place indoors. You will see this often in the Annunication icon. Also in the Annunication, Mary is usually depicted holding some yarn. This signifies that Jesus is already being knit in her womb. In some icons Saints are often shown with objects that are associated with them such as St. Katherine and a wheel that was supposed to be used to torture her, but which broke apart when she touched it. There are lots of interesting symbols to point out to children in icons. I usually talk about icons in a lesson with Byzantine mosaics and show the children some painted icons, but also mosaic icons in famous churches- then we do the mosaic project. Children could also color in a line drawing of an icon of Jesus or Mary and be instructed to pretend to be an iconagrapher and color it in very carefully and reverently using the correct symbolic colors. You could talk a little about iconographers and how they need to have a good relationship with God, attend church regularly and pray often and before they begin an icon. The artist also adheres to very strict criteria when creating the icon. The facial features are often enlongated, everything looks very 2-dimensional, etc. This is to give the icon a feeling of something spiritual with a deeper meaning instead of depicting the objects and people more realistically and earthly. I like to use the children's book Pictures of God by John Kosmas Skinas as a guide when teaching children about icons.

Posted by jeanniesophia at 5:50 PM