This is an Art History lesson I did on Early Christian Art. 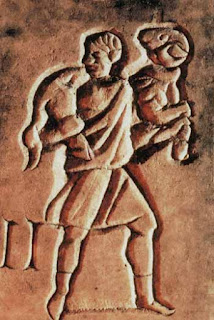 I focused on the catacombs of ancient Rome and the Christian symbols found painted and carved there since this is one of the earliest known examples of Christian art.  The lessons are generally broken up into three parts.

STORY
I read this story to the children that I wrote which tells about a Christian boy from ancient Rome walking through the catacombs with his family.  If I have a small group of children I like to sit in a circle on the floor while I read the story.  If we are in a more formal setting then the children sit around a table while I read to them.

EXAMPLES OF ART
Next I showed the children examples of art from the catacombs.  This is a good time for discussion and questions from the children.  I mostly referenced the book The Catacombs of St. Callixtus: History, Archaeology, Faith.  I also showed some examples of Christian symbols from an Art History book I got on PaperBack Swap and some examples I printed off from the internet.  I only own Volume 1 of Art History by Marilyn Stokstad, but it has been really helpful and I highly recommend it.  I've used it as a resource for many of my art history lessons.  Volume 1 covers pre-historic art through the art of the middle ages.  My local library has a larger volume of the same book.  I have the 1st edition, but there are many newer editions available used online.  There is a page of Christian symbols and an explanation of different Christian crosses in the Stokstad book that I showed to the children and gave them copies to look at while doing their project.  This website has some good links to early Christian symbols also.

The Christian symbols listed in the Art History book in the Early Christian, Jewish and Byzantine Art chapter are the Dove, Fish, Lamb (Sheep), Four Evangelists, Monograms (alpha and omega, chi rho) and the Latin, Greek, Tau, St. Peter's, Russian, Papal and Maltese (Crusader's) Crosses.  You can find some of these symbols on the handout link below or on the internet.

I gave the children a handout which explained various terms and gave examples of several Christian symbols.  You can find that document here. 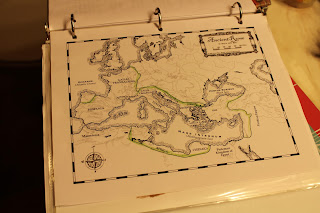 I also gave them a map of Ancient Rome to keep in their notebooks.  I used a map from Olde World Style Maps which can be purchased here.  I have used these maps for various lessons and I sometimes use maps from the Story of the World Activity books for whatever time period we are studying.  The closest map I could find in the the Olde World Style Maps for the early Christian time period was a map of Ancient Rome 40 BC which is a little early for this lesson, but close enough.  There is also a map of Rome at the time of early Christianity in The Story of the World Activity Book that you could use if you have access to that book.  I had the kids shade in the area on their map that showed the extent of Ancient Rome at that time. 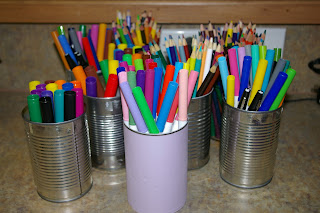 PROJECT
We moved to the table and I gave the children blank paper (I used regular copy paper) and colored pencils and markers so they could draw some of the Christian symbols themselves.  I asked them to imagine themselves as an artist decorating the tomb of a Christian in the catacombs.  My 8 year old daughter drew a number of different symbols while my 11 year old son decided to draw all of the various crosses I had showed the students from the Art History book.

I also have a very simple line drawing that I made of the area around a tomb in the catacombs.  You can print it out and have your child decorate it with Christian symbols.  It can be found here.

This was a fairly simple project that any age child could complete at their own ability level, but it gave the children a good introduction to early Christian art and symbols.  Unfortunately I didn't take many photos of the projects the students completed the day we did this project in class.  You can click on the photos included here to see them larger. 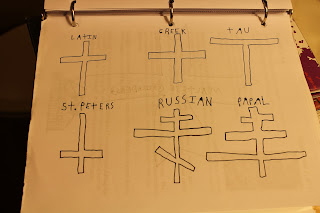 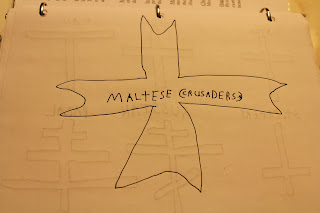 Side note on 3-ring binder notebooks:  This project was the first of a ten week session on Early Christian Art and Art of the Middle Ages.  I had 8 students in the class ranging in age from 6-12.  I asked each child to bring a three-ring binder in which to keep their handouts, maps and art work.  Some projects were three-dimensional and wouldn't fit in the binders, but overall the binder system worked well for a longer session like this.  For the shorter sessions I didn't ask the children to bring binders, but I still often gave them handouts.  If you are going to do art history for an extended length of time it is a nice idea for the student to keep a three-ring binder to keep each week's materials.  One semester I also took photos of the projects that would not fit in the binders and made a couple of simple scrapbook pages with those photos for each child to put in their binder.  It makes a great memento of what the children have learned and the projects they have completed.
Posted by jeanniesophia at 6:38 PM